Jodo is a Japanese martial art using staves (jo) in defense against the Japanese sword. The jo staff is usually about 3 to 5 feet (0.9 to 1.5 m) long, about the average length of a walking stick. However the art was not used, as one might fancifully imagine, by travelers to ward off aggressive bandits or swordsmen, but was the province of professional warriors.

The main target to which hits and thrusts are aimed is the solar plexus. Besides this, the temple, the point between the eyes, and the sides of the torso are also important targets.

The actions of the jo when executed in combined series are very effective as a defence against attacks with a sword.

A remarkable aspect of Jodo is the rapidity with which the jo is handled. This is due to the fact that the jo has neither beginning nor end, which allows for many combinations. The jo is as such an excellent way to develop dexterity. 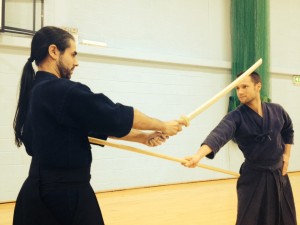