Home » Iaido (居合道) or “The Art of Drawing the Sword”

Iaido (居合道) or “The Art of Drawing the Sword”

Iaido is a modern Japanese martial art in which practitioners learn the forms of Japanese swordsmanship using a wooden or blunt-edged metal sword. It involves drawing the sword and cutting in smooth, controlled movements. Unlike Kendo, Iaido does not include fighting or sparring techniques, instead emphasizing precise, controlled, fluid motion. 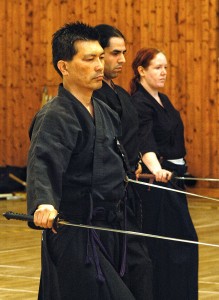