Kendo na hÉireann held its first Iaido Kyu Grading on 26th July 2014. This was an historic day for the federation and shows the growth of ZNKR Seitei Iai in Ireland. A brave five candidates participated in the grading, and we hope that this will be the first of many such Iaido events that the Federation will organise.

A big thank you to our grading panel, Kohei Uetoko, Hitomi Akutsu and Raul Fernandez. 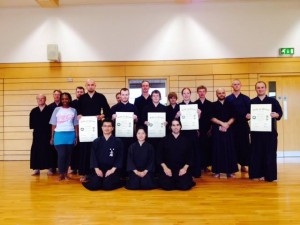